Hey guys I’m Mariah Milano and I’m in Cedar Key Florida and I’m at Steamers
right on the water and this place is amazing this is one of my favorite
restaurants and I’m so excited to get to show it to you.  It’s sunset right now, so it’s beautiful.

The sun’s going down and I’m about to have raw oysters and steamed clams and
then they’re gonna bring me out their house specialties, I’m so excited to see!

Look at this pretty view I have. This is a Corona Rita it’s a margarita with a baby Corona
in it -very good! Oh my guys, look at these steamed clams in garlic white wine sauce and
look at these raw oysters how beautiful like I’m in heaven right now and these
all came from that water, right there (Cedar Key) A huge portion of America’s clams come
from here right here in Cedar Key.

I’ve had these served before and they are to die for. Oh my perfect little cute
piece of bread right here you dip it in the garlic butter white wine sauce – so good!

Oh my, so fresh, so good perfect okay get that camera out of my face now
I gotta eat this is their incredible fisherman’s platter they told me I had
to try that because it’s so good so this is grouper crab cake hush puppies fried
shrimp and they’re super terrified and let me tell you it smells great.
so what exactly is this that affects portobello mushroom cap stuffed with
fresh crabmeat green cheese it’s got a few herbs in there and they wrap it in a
Philo crust brush it with some butter bake it in the oven and then they
drizzle it with the house-made herba

Wow it looks and smells amazing thank you and of course garlic parmesan fries oh my
it’s like a desert almost I can’t explain it just this alone is worth coming here it is so good oh my.

So you see why I had to come back here in film so I can show you guys I’ve been
thinking about this a lot summer I was here so come to Steamers and Cedar Key
Florida the websites right on the screen.  It’s a short walk or bike ride from the best
gulf front vacation condo in Cedar Key – Seahorse Landing #503

30 Best Travel Tips after Years of Traveling the World 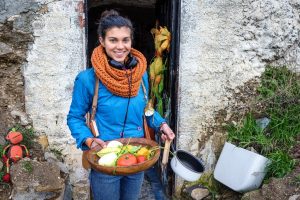 It’s now been 7 years since I sold everything and left the United States to travel the world. These are
the best travel tips I’ve discovered along the way.

It all started when I took a one-way flight from Miami to Guatemala City, leaping nervously into the
unknown and leaving much of my old life behind while embarking on an epic travel adventure around the
world.

It’s been a wild ride, and I’ve learned a lot since I first left. To celebrate my “travelversary”, I’ve
decided to share a collection of my best and most useful travel tips to help inspire you to make travel
a priority in your life.

Welcome to Cedar Key – Clam Capital of the South

Hey this is Sean Daly would you look at these beauties!

We are at Cedar Key today and we are all about clams. An hour west of Gainesville, Cedar Key produces
95% of Florida’s clams – that’s 200 million clams a year. Bi-valves bond this town which is more than earned
its nickname clam a lot. Clams are Cedar Key it’s what this town pretty much lives off of – I’d say that
the two biggest industries in Cedar here is clamming and tourism and without theclamming I don’t think
there really would be very much tourism because it’s what supports this town and it’s what supports you
know so many people that live here.

This is a wonderful plant facility it’s one of our larger ones on the island and this is a processing plant as well
as a hatchery and hatchery is means that’s where we catch the baby clams.  This is really come in with the
product wash it clean it sort it count it tag it and bag it.

But Cedar Key is more than just a working waterfront a cluster of islands more than 20 miles
off the beaten path – it boasts of being old Florida a cozy getaway from the 21st century grind.
I came from a place where I never knew my neighbors name, I know all of my neighbors names here.
So it’s just as people are compassionate and friendly – people wave so it’s just something that you don’t experience
in a larger city. It’s incredibly charming, so even if seafood isn’t your thing you can still fall in love in Cedar Key.

That said, look at those beauties!

If you are looking for a great place to stay in Cedar Key – look no further!

Top 10 Things to do in Florida

Devil’s Den natural springs
Devil’s Den is a natural spring located an hour and a half outside of Orlando it was formed when a roof of a subterranean river collapsed thousands of years ago and gave us this beautiful wonderful behalf today there’s 400 water passages that you can explore just make sure you have a flashlight when you go.
Florida Everglades
1.5 million acre of wetland that covers the south of Florida full of unique wildlife and lots of floating grass the slow-moving river the localized shallow is breeding ground for a lot of interesting creatures we’re going to find Gators here.

Florida Keys
Today we’re going RC this is one of my favorite spots in the entire state it’s a strain of tiny little islands going from the top all the way down into the Gulf of Mexico they used to only be accessible by boat but in the beginning of 1900s they built a railway which was swiftly destroyed 1935 by hurricane since the distraction of the railway connecting the islands in 1935 people have been building highways to connect the entire string of islands all the way to qsr which is the farthest on island the longest bridge between the islands is a seven mile bridge which is completed in late 70s the keys were one of my favorite places in the entire state of Florida just because it’s unlike anything you’ve ever seen before what justice is taking us the key was there’s no other place in the world that I can think of where you have a highway that you’re driving through the ocean you got the Atlantic on one side and you got the Gulf of Mexico on the other side bridges there are about seven miles long and there’s nothing around you but ocean and that is the coolest thing to be driving through the ocean like that so definitely go .

Gainesville Florida
Gainesville is a vibrant city located in the northern region of Florida and houses the University of Florida due to its large student population isn’t exciting an eccentric place for you to go get a beer season live music or even just see live music on the street Oh Gainesville was voted the best place to live and play in 2007 by National Geographic adventure magazine so what why we added Gainesville to the list is we were super Jonjo but we just arrived in this really cool town was taken away by all the architecture and building from small bars that we had recently seen inside of Florida so that was a main reason why we liked it all over the place in a good mood actually approaching us and saying what are we doing and just always very approachable. Only 1 hours drive to historic Cedar Key, where you will find great nature coast scenery with an incredible gulf front condo in Cedar Key.

Morrison Springs
Morrison Springs is 160 acre park but made famous for its quarter-mile Springs that you can swim or scuba dive in now whether you’re scuba diving or just free diving with a mask and snorkel there is a ton of cool stuff to see underwater sadly when we went the recent rainfall had stirred up a lot of leaves dirt and debris and there wasn’t very much that we personally can see but it was still a nice Park in a nice swim nonetheless.

Wildlife
Since Florida is in tropical water you always have all kinds of tropical fish and mammals such as dolphins and manta rays it’s really cool to see manta rays when they mind great because sometimes they jump out of the water and it’s really exciting this is what right in front of us you got all kinds of things in the water you got crocodiles and alligators things you do wouldn’t really see anywhere else in the United States all of it in one hotspot which is four you’ve got a lot of pelicans and the pelicans are hungry and they’re not afraid of you and they will take food directly out of your hands so watch out for the pelicans!

10 Tips and More for Renting a Condo Online

10 Tips for Renting a Vacation Condo on Booking.com, TripAdvisor and airbnb

airbnb, a site where individuals offer and discover lodgings to lease, asserts more than 1 million postings in 34,000 urban areas everywhere throughout the world. With a consistently expanding assortment of facilities (from basic houses to strongholds to yachts) it’s engaging an ever increasing number of individuals as the go-to hotspot for a country estate far from home. For more observe: The Pros And Cons Of Using airbnb.

The voyage to a getaway condo starts with an online inquiry. The airbnb site is anything but difficult to explore and connecting to your area, dates and number of visitors is direct. Make sure to tap on “Whole Place” under the Room Type subtitle to guarantee you are just demonstrated condos – rather than single rooms, flats and apartment suites.

And after that? The accompanying 10 hints will help guarantee everything goes easily starting now and into the foreseeable future. END_OF_DOCUMENT_TOKEN_TO_BE_REPLACED

Our vacation condo rental in Cedar Key has 2 bedrooms and 2 baths.  There is a full size kitchen with all appliances as well as a full dining area.  In the living area there is a comfortable pull out sofa bed.  Each of the bedrooms has a queen size bed and their own bathrooms.  There is a washer and dryer in the Seahorse Landing #503 condo rental unit.

The incredible view from the 3rd floor balcony with take your breath!  Since this condominium rental in Cedar Key is an end unit, you will have even more privacy with the wrap around balcony.

Seahorse Landing has a pool and hot tub for guests.  There is also a private pier and boat dock.

After a dozen years of constant travel, I have definitely gathered some useful information and tips (as well as learning moments). Like the time I was robbed on a train because I let my guard down or the time my husband and I arrived at the airport only to find out that we no longer had a car rental.

Several of these travel hiccups can be eliminated and some of them are just a part of travel. You just can’t plan for everything. However, keeping a few important things in mind will make your travels much easier. So, in no particular order, here are my 25 best travel tips: